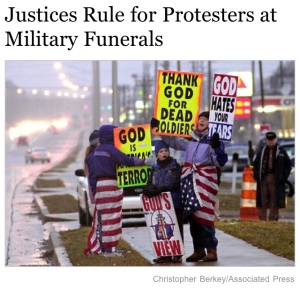 The Supreme Court ruled today that people have the right to be a jerk.  And sadly, it was the most consistent decision they could have made. (Read the article here)

The Westboro Baptist group has been picketing military funerals and spreading the message that God hates humanity for a long time.  And today, their right to be a jerk was protected.

Now, I detest the message and communication of this group of hate proponents, but as I read my paper today I was struck by the incredible patience and restraint our society has with such mean-spirited and hate-filled people.

And if the secular court has such tolerance for such un-tolerant people, I wonder if the mainstream church has fallen victim to over-hype when it worries about it’s own censorship in the postmodern future.

Fear. It drives a lot of church rhetoric these days.  I’m pretty sure it influences a good deal of church strategy as well.

And for what it’s worth, I think I understand it.  Culture has changed.  The Christian narrative is no longer the dominate influence that it once was in this country.  Space for other religious persuasions and even anti-religious perspectives have been created in the arena of our American culture like never before.  And while I personally don’t see this change as traumatic or bad, I can see where it causes some Christians concern.

Growing up my whole life in church and now having worked within the church for the past 10 years or so, I have seen this fear first hand.  Maybe you have too.

I lose count of the amount of times that I have heard statements from other pastors bemoaning the loss of influence of their religion and fearing what the future may hold. 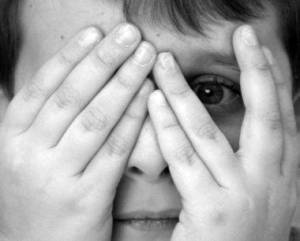 Well, I suppose all that could happen.  But, then I read stories like the one that I stumbled on in the New York Times today.

The Westboro Baptist group represents about the worst that church has to offer.  Not only to humanity as a whole, but specifically irritating to an “inclusive” society like our postmodern America.

And yet, the courts upheld their rights to speak… even though it is hate speech.

Now, I hope no church I’m ever a part of is known for what the Westboro group is known for today.  But if the secular courts are willing to protect the “freedom of speech” for such a hateful, anti-humanity, anti-Christian religious group like that, should we really be concerned about losing the same privilege of speech?

Maybe our Christian culture of protectionist fear is more unfounded than some think. Maybe allowing other people’s voices to be heard isn’t the same thing as a plan to eliminate ours.  Maybe the secular culture we love to criticize will in the end protect our right to speak even if they hate what we say or how we treat them.

Maybe it’s time we stop living in fear of how the culture wants to silence us and start engaging the culture, pointing out the beauty that exists in it and changing the ugly parts not with our whining, but with our community action and sacrifice.

If we do, we might just find our society listening and interested in what we have to say rather than just gritting their teeth and defending our right to say it.