I have to sing a song to spell MISSISSIPPI correctly.  Just seems like there are a few too many “S’s” in there, doesn’t it?   But, I’m sure it is a beautiful state.  And anyway, I received a facebook message from a friend who lives there a few weeks ago.

It was great to hear from a friend I hadn’t communicated with in a while.  Isn’t Facebook great?  Ahhh, cheers to you, facebook people!

But, it started an ongoing conversation that has been one of the more rewarding and fascinating conversations that I have had in a long while.   One that I think is too valuable to keep to ourselves.

And so, with her permission, I have decided to let you over-hear our conversation.  Now, you should know from the beginning, that we don’t agree on a few things.   And I think that will become obvious as you read.  But, you should also know that we DO agree on a great deal.  Not the least of which is our love of God, our love of people and our commitment to friendship.

You should also know that though we have different perspectives on some things, I highly regard and respect her both as a person and a thinker.  And whether you agree with my perspective or hers or neither, I hope that you respect our friendship as well.

And lastly, you should know that the conversation you are about to listen in on, is a dialogue in process.  Though I can’t totally speak for her, I can say that God is continually reforming my thoughts on these areas and that where I am today may evolve by tomorrow.  And in that way, you are not reading our hard and fast thoughts, but our attempts to discover what we believe out loud, in conversation, with each other.  It is more vulnerable that way, but more rewarding, I think.

And so, I will post our comments back and forth to each other over the next few days.  “Letters from Seattle” will represent me.   “Letter from Mississippi” will represent her.   And it is our prayer that no matter where you come out on these issues, that it would cause you to think, to stretch, to grow, and to maybe start your own conversation.  Or in some way join into ours by leaving a respectful comment here.

Maybe the time for distasteful arguments is done and the time for constructive and respectful conversations is finally here.   God, may it be so.

To have the proper context, however, you must have read an earlier blog I wrote several months back.  And so I have re-posted it below.  I will follow with the first “Letter from Mississippi” in a few days.

I drove home from the gay bath house last week [see my previous blogs about Gay Bathhouse] and came home to a startling news story. Well, it was actually just a news teaser for the 11-o’clock news that night during a commercial break during “The Office.” But, nonetheless, it startled me.

Headlines like that tend to catch my eye. So, i tuned into the local Seattle newschannel website to read up on what it was all about–after “The Office” was over, obviously.

The basic story was that each year, high schools in my area (and probably elsewhere) celebrate a day called “day of silence.” It is an event sponsored by the “gay, straight alliance” that encourages students to not talk all day in order to bring awareness to and solidarity with potentially gay students among them that are treated poorly, made fun of and often don’t have a credible voice.

A local mega-church pastor, who lived in the community of one such high school, decided to organize a protest of the event. So, in front of many news cameras, he called for 1,000 members of his church and other Christians to come down and picket and protest outside of the school for the whole day, chanting their anti-gay views and “correcting” the sin of a few through the personalized and compassionate forum of a billboard sign. 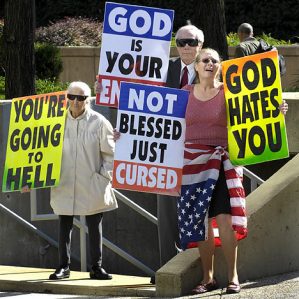 Now, in one sense, i realize that “day of silence” probably has a pro-gay agenda to it. But, as i read the article, i couldn’t help but wonder, “what is so wrong about not wanting gay students to be made fun of, physically abused or emotionally taunted?” In that regard, as a follower of Christ, i whole heartedly agree with the sentiment of the day. And on any level, what does picketing a bunch of high schoolers really accomplish?

My problem was i had just come home from sitting inside a very promiscous gay bath house in Seattle, where i had been sitting with my friend Rick handing out condoms and information to everyone who walked in. We didn’t personally know any of the guys that came in that night. We didn’t have any signs. We weren’t chanting anything. We simply handed out latex.

And as i sat at home reading the news story, the dichotomy of events perplexed me. On the one hand there was a mega church pastor that many people know, calling for Christians to protest teenagers attempting to humanize homosexual people that are often treated otherwise. And on the other hand, there was an everyday Christian that nobody knows, living with AIDS, sitting in a place most don’t know about and would never want to go to, handing out medical prevention (though not perfect) to oppressed adult addicts.

And in this case, the Mega-Pastor is Mega-WRONG. What the MP (mega-pastor) fails to realize is that protest without relationship is simply verbal violence. What the MP doesn’t understand is that compassion for people who don’t agree with you is “loving your neighbor as yourself.” What the MP has mistakenly accepted is that if you yell loud enough Jesus’ voice will be heard, when Jesus himself yells only at the religious pharisees and whispers grace to the sinner.

And as far as i can tell, Jesus never organized a protest of anything (unless you count his little tirade against the religious leaders in the temple), he simply went and ate and spent time with people who’s lives missed the mark of God’s ideal, calling them to something more fulfilling. He loved them to “abundant life.” There was no place for protest.

And so, Rick sits in Seattle at a gay bath house. No signs. No chants. He hopes that he is making a difference. Is a condom the answer to the problem? No. The problem is much more complex that what simple latex can fix. There are emotional, spiritual and mental issues that must be addressed. A holistic answer is needed.

But in the vaccuum of that answer, it is the only thing Rick knows to do. And so he does it.

It makes me wish that when people thought of Christians they thought of people like Rick rather than the blow hards that get all the news headlines like our local mega-pastor last week.

It makes me think that if Jesus were here today, he’d probably look more like the average guy, Rick, than the news bite mega-pastor any way. 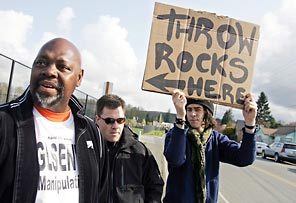 I often ridicule Christians, mostly because we are such an easy target. But, i really don’t think all Christians are bad. I am one. Or that church is bad. I’m a part of one.

But, what scares me is that there is a vocal minority giving my faith a bad name. No, not my faith, my God. People hear words like they did last week and think that they are God’s sentiment or God’s words. And they never have been. The mega-pastor is simply wrong.

So, here is to you, out-spoken mega-church pastor. I’m pleading with you. Please examine your response to people with the life of Jesus before you speak and act in ways that shame Him and us.

I’ll even keep using the name “Christian,” if you’ll start acting like one.