I just finished reading a book, “ReJesus” by Alan Hirsch and Michael Frost.  I will be doing a full book review tomorrow, however, there was a great quote that I thought I would post today.   The quote comes as a bit of a “side-note” in the greater context of the book, but is well worth the space re-typing it  here.

“For many suburban, middle-class churches, niceness is the supreme expression of discipleship.  But any cursory reading of the Gospels will serve to remind you that Jesus wasn’t always nice.  He was good.  He was loving.  He was compassionate.  But he wasn’t always nice.  The church must abandon its preference for good-manners piety and adopt again the kingdom values as taught by Jesus. 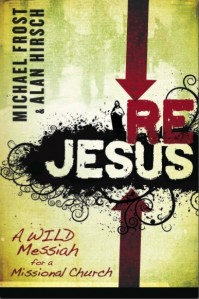 Allow us to give you an example.  Some time ago Michael wrote an article for a Sydney newspaper, commenting on the influence of Sydney’s largest church, Hillsong.  In the article, he defended the church against various attacks in the media, but he also gently raised his concerns about Hillsong’s emphasis on prosperity doctrine (the so-called health and wealth gospel).  He received an avalanche of letters and emails berating him for daring to be publicly critical of another church.  A significant number of these angry correspondents claimed that it was un-Christlike to criticize the church in any way.

Now, whether you agree with Michael’s decision to write such a thing in the media or not is beside the point.  But the point is that somehow these people, most of them ministers, failed to recognize that Jesus was regularly and scathingly critical of the religious leaders of his faith community.  Furthermore, Jesus’ seven messages to the seven churches in the book of Revelation (Rev. 2:1-3:22) contain plenty of harsh critical comments directed at the church!

To claim that it is un-Christlike to criticize the church is to disregard the example of Jesus.”

Wow!  Nicely said.  In the Spirit of Jesus and the personality of those like yesterday’s Soren Kierkegaard, maybe the call is for at least a few to become this new voice of reformation in the church today.   Could it be that what is needed is not so much a voice that is critical of unbelievers, but an “inner-voice” within the church that is critical of what we have created out of Jesus’ teachings and life?

Of course there is no room for a spirit of meanness, disrespect and destruction, but maybe as much as any time in history, the church needs the new voices of Luther, Kierkegaard, Calvin and even Jesus Himself to be heard.

Rather than reacting with anger towards these voices calling us to reform, perhaps it is time to evaluate the merit of what is being said and look again with a critical eye at the static religion we have created out of the wild and beautiful revolution Jesus initiated.

Possibly we are due for a total re-calibration and re-centering on the person of Jesus in our organizational churches.

For a great start to this discussion, consider picking up a copy of “ReJesus“.

One thought on “ReThinking Religion”