I am at home tonight all by myself.   The house is mostly dark, except for the dim 15-watt icicle-bulbs reflecting off the ornamental glass in the entryway and the soft-glow of SportsCenter spilling into my living room from the TV.

It amazes me how such a little amount of light can illuminate an area and shatter the otherwise complete darkness. 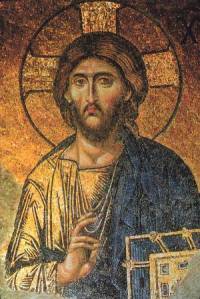 And in the middle of that darkness, he came forward and made a radical claim.   But it isn’t just the claim that impresses me tonight, as I sit in darkness, it’s the context.

You see, once a year the Jews would celebrate a week long party called the “feast of booths” or the “feast of tabernacles” that served to remind them of their people’s history of being led around the Sinai desert, living in tents and provided for by God for 40 years.

And each year, at the end of the first day of the “feast of tabernacles” the Jews would hold a special celebration.   The daylight would grow dim and finally give way to the night sky and the people would gather in a specific courtyard of the temple called the court of women.

As the people gathered, four large candelabras accompanied by four large bowls of fire would be lit.   And as people arrived to this festival of light, musicians would begin to play and some would break out into song.   Soon everyone was singing the ancient songs of praise.   And dancers would fill the middle of the courtyard moving in sequence to the music and tossing lit torches into the sky.

They danced and sang into the night to celebrate the God who brought Light into the darkness.  They remembered the God that led their people through the utter darkness of a desert by blazing a fire into the night.

It was the dark of night, and yet the courtyard was bright like the light of day.

And it is in this context, in the middle of the festival of light, that I believe Jesus approached and said the words, which stunned the people…

He was declaring that he is the one who leads us and guides us and shows the best way to live in a world that is so full of darkness.

He was referencing the first thing that God creates in Genesis (light) and claiming to be that creative power in our midst.  As if he could once again recreate our dark world.

He was pointing at the brilliance of dancing flames all around and claiming to be the source of that light.

He was saying, that though the world lives by the darkness of fear, oppression, violence and power, that he offered the kind of life that could overpower that darkness for individuals and even all of humanity.

He was, as he looked around at the celebration, saying that the party was about him.

A beautiful statement.  Complex.  So full of subtle meaning and intent.  And scandalous to be sure.   To tell religious people that you are God, is fraught with controversy.  =)

But, it isn’t what Jesus says about himself that is most controversial.  I mean, from this side of history I can at least understand that Jesus would claim to be the “Light of the world”.

Jesus calls YOU the light of the world.

Now, has Jesus just lost his mind here?  Does he really understand what he is saying?  Did somebody perhaps quote him wrong?  Did he mean to repeat that “he was the light” but goofed up?  I mean, which is it?  Is he the light or are you?

What if Jesus really meant what he was saying?  What if both are true?  What if in some complex, meaningful way YOU really are a partner in the recreation of this world?  What if Jesus was simply saying that your life matters much more than you think?  What if He is counting on your light?

In their new album, “No Line on the Horizon”, U2 has a song titled “Get on Your Boots”.  And in this song, Bono is calling all of us to put on our boots and get to work re-forming this world into what God originally intended.

Maybe Bono is right.  Maybe we really don’t know how beautiful we are.  Maybe we have sat around too much waiting for what God will do, when all along Jesus was saying, “YOU are the light of the world.  Go be the light!”

If this is true, than maybe my living room doesn’t need to stay dark.  Maybe I just need to turn on a light . . .

In Jesus’ day, the temple of the Jews sat on the hill elevated in the city of Jerusalem.   And because of its prominence, it could be seen from many parts of the city. 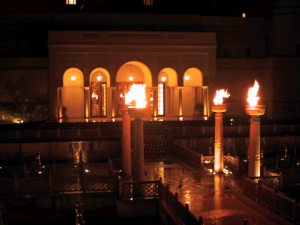 And there were some who said that on this night during the festival of booths that light from the courtyard of the temple was so bright that every courtyard in Jerusalem was lit.   Because the light was so intense it spilled out into the night and illuminated every other courtyard in the city.

Every courtyard was lit because of the light coming from the temple.

I wonder how many courtyards and driveways and living rooms around my city could be less dark because of the light in me.

Maybe my city is ready is ready for me to embrace not only Jesus’ statement that he is the light, but that because of him, I am now too.

“You are the light of the world.

A city on a hill cannot be hidden.  Neither do people light a lamp and put it under a bowl.  Instead they put it on its stand, and it gives light to everyone in the house.  In the same way, let your light shine before others, that they may see your good deeds and glorify your Father in heaven.”  (Matthew 5:14-16)

One thought on “Why am I still sitting in the dark?”